Frequently asked questions and their answers

Why display protection? The high-quality display is very robust after all!

It's not only about the scratch protection of surfaces and screens, but also about the topic of anti-reflective coating for reflective and glossy displays, also called bright display, glare display or clear bright. In addition, modern displays are very expensive and even the smallest scratches can interfere with the readability and the look! Of course, there are quite good polishing pastes for displays, which can polish out small scratches from plastic displays. However, scratches in glass displays cannot be polished out!

However, it is much better and more convenient to equip your device display with professional display protection in advance. The following feedback on the quality of Neoxum films was sent to us by an industrial customer. Our customer is a metalworker and deals with sharp metal objects on a daily basis. He carries his Apple IPhone 3GS with him in the production shop. Due to carelessness, a piece of sharp metal weighing approx. 200 g fell onto his Apple iPhone 3GS from a few centimeters away. By using the Neoxum AS scratch protection film with 0.13 mm thickness, a display damage could be avoided. The display film was quite badly affected, but the Apple IPhone 3GS display remained unharmed. The protective film can be replaced at any time without leaving any residue. A new display protection film protects the smartphone's display that remained intact. 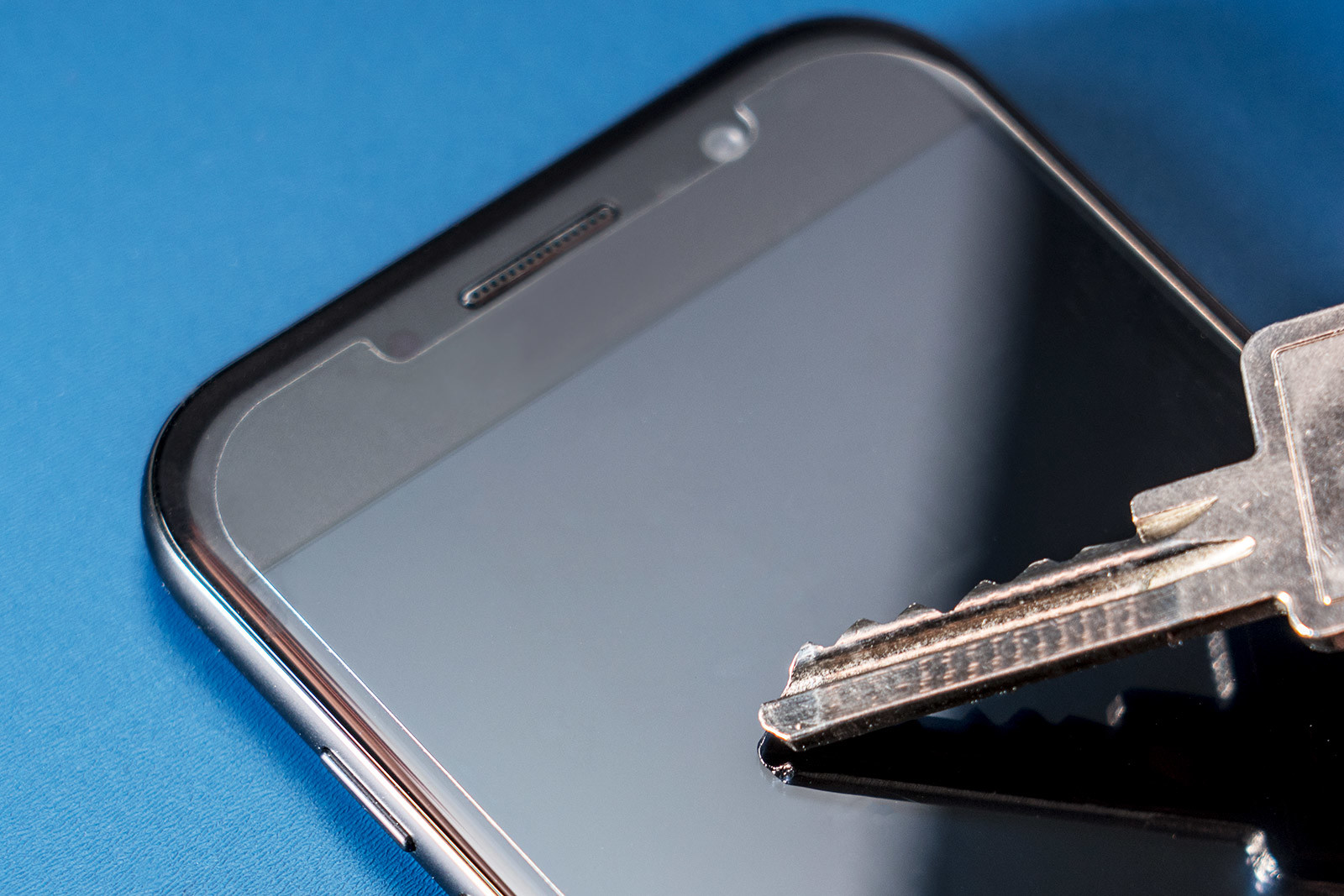 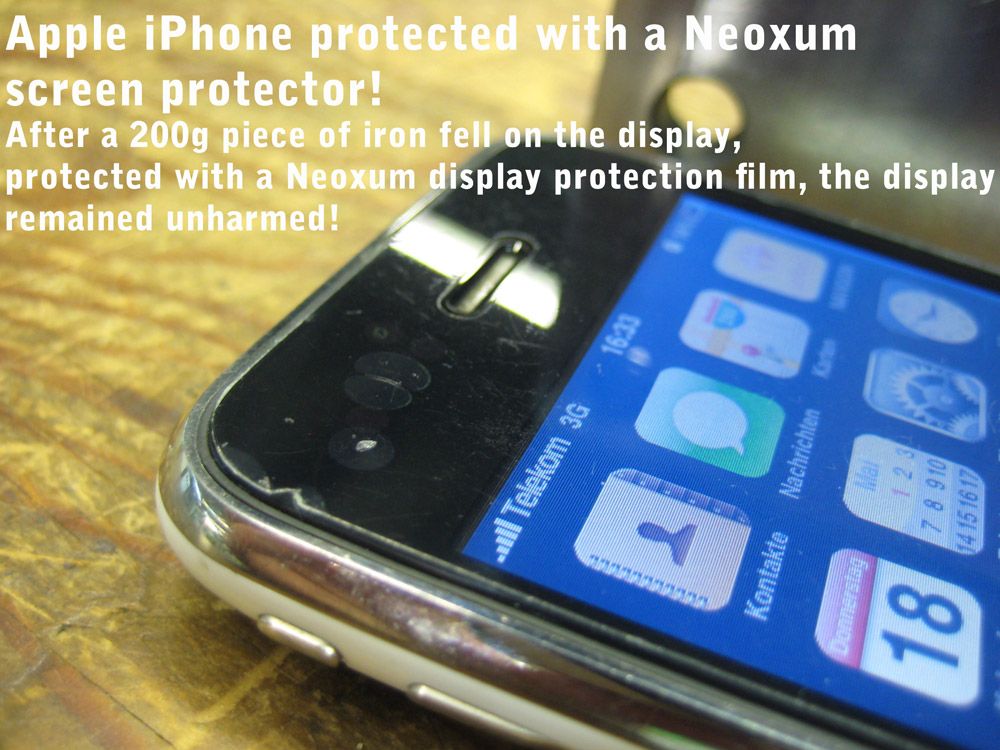 Reflections on the display are quite annoying and distracting. Besides the reduction of the image contrast, important elements and information on the display are partly completely obscured. A further negative effect is the reduction of the visually recognizable color dynamics due to the bright environment or with peak lights, which create a strong reflection on the device display. Another problem is the different focus of the human eye on reflections. These are mostly due to point light sources a few meters away, such as lamps, or windows through which daylight penetrates. Our human vision is very irritated by this: Should the eye now focus on the mostly very bright reflection or on the screen content? A comparison of the brightness of a display, e.g. a good cell phone display of an iPhone or Samsung smartphone with 600 -1000 lux with a modern office ceiling LED lamp with 30 watts at 2500 lumens, a beam angle of 35° and a distance to the viewer or cell phone display of 2.5 meters, gives the following result: The ceiling LED still has about 1300 lux at this distance under the above assumptions. Accordingly, the point light source is 1.3x to 2x as bright as the light source in the display, depending on the situation and the screen brightness setting of the smartphone. We will spare a comparison to the sun at this point: Everyone knows the enormous luminosity of our fixed star, which makes it almost impossible to read information on a reflective display outdoors. 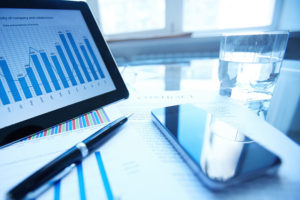 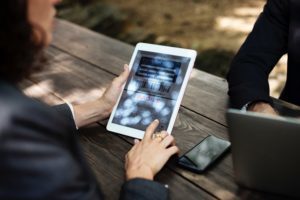 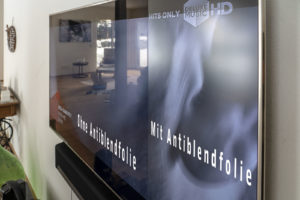 With the help of a factory-applied anti-reflective layer or subsequently applied λ/4-layer film, some manufacturers reduce the reflection on the reflective display. These anti-reflective coatings are very often called λ/4-layer because the anti-glare effect is based on the destructive interference effect. Unfortunately, this type of anti-reflective coating also makes itself unpleasantly noticeable with a purple-blue color cast, since the relatively short-wave green range around 550 nm is filtered out and the addition of the remaining color components cause this blue cast. A disadvantage of this λ/4 layer is also the limited effect with point sources and their point reflection.

Anti-glare due to matte antireflection coating

With older displays, such as older Apple iMacs, you could reduce the reflection very well with a matte screen protector. Unfortunately, you also lost the sharpness of the screen content because the distance between the screen glass and the actual LCD display was relatively large. Fortunately, the distance between the cover glass or display and the actual LCD, LED, min LED or OLED screen is very small in most display models (or no longer exists at all due to new technologies), so that a very effective anti-reflection coating can be achieved by means of matt scattering of the reflection. In the following example, we have equipped a Samsung UE55D8000 LCD TV from 2011 with a Neoxum anti-reflective film on the right half of the screen. You can see very clearly that objects in the living room cause sharply outlined reflections due to daylight penetrating through window panes. 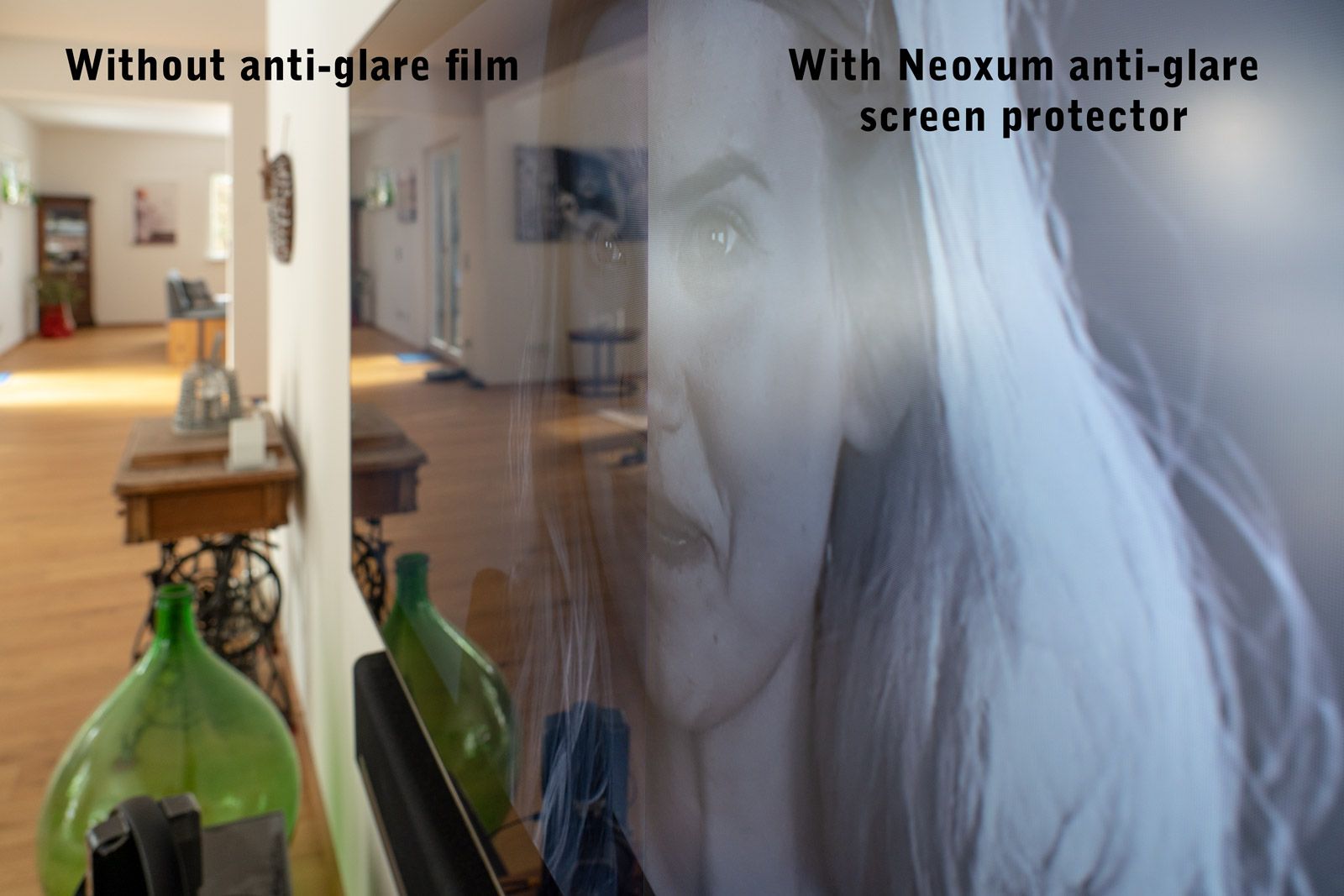 Objects, like the green glass jar, are sharply outlined and reflected on the screen. The surroundings of the living room can also be perceived very well as a reflection. The border between the left reflective half of the display and the right half of the screen with the applied anti-reflective Neoxum display film runs exactly from top to bottom through the actress' nose. Comparing the two eyes of the woman, it quickly becomes clear that the left eye is almost completely covered by a reflection of a mural. The contrast is greatly reduced. The left eye can only be guessed at. Watching TV in daylight with many reflections on the TV screen is almost impossible. Only after applying the special anti-glare film the screen reflections are effectively scattered: the right eye of the actress is clearly visible in the picture and stands out prominently. Punctual reflections are strongly diffused by the special matt display film, so that incident light at the air-glass interface of the TV screen is no longer reflected according to the law of entry angle = exit angle, but is extremely strongly diffused. As a result, surfaces as well as point light sources are no longer perceived as disturbingly reflective. Television is also possible in daylight. With the help of such anti-reflective screen protection films, reflections can be reduced by up to 85 percent..

The AGS (Anti-Glare Protective Film) anti-glare display film provides anti-reflective protection and protects sensitive displays at the same time. Due to a special surface treatment, annoying reflections on the display are very well reduced, so that even outdoors the display becomes legible again. The following video illustrates the anti-glare effect of the Neoxum display film with a very strong point light source, an LED lamp.

As a highlight, we can also offer our high-tech material hybrid glass in an anti-reflective variant. Thus, we achieve a further increased robustness of the applied display protection with the help of the novel hybrid glass, which combines the advantages of a high-performance film with the advantages of glass: very flexible and yet a glass-hard surface. 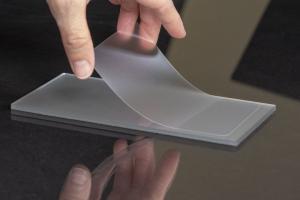 Our technical data sheets, test reports and certificates can be found in our download area. Most of the documents are also available in English. 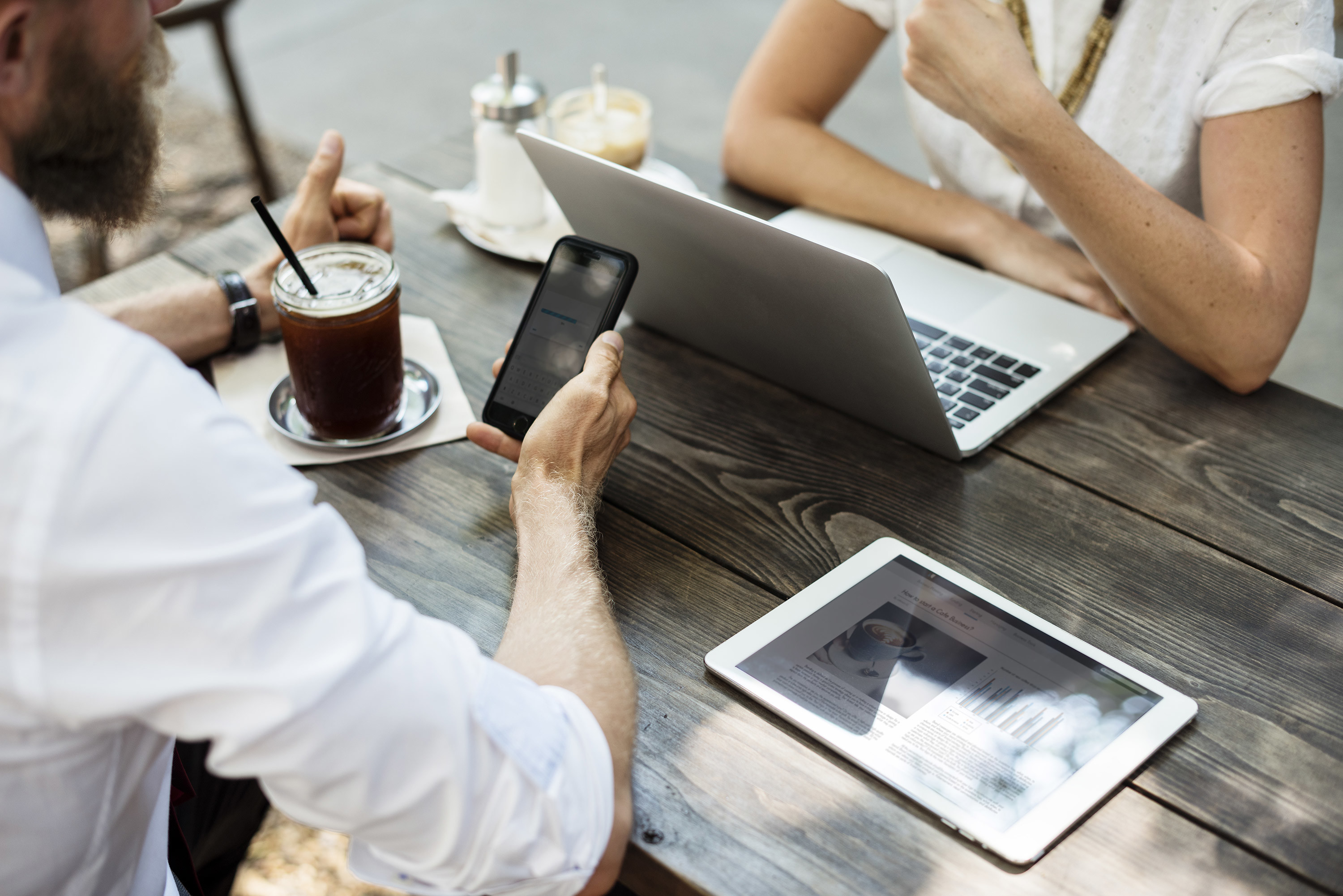 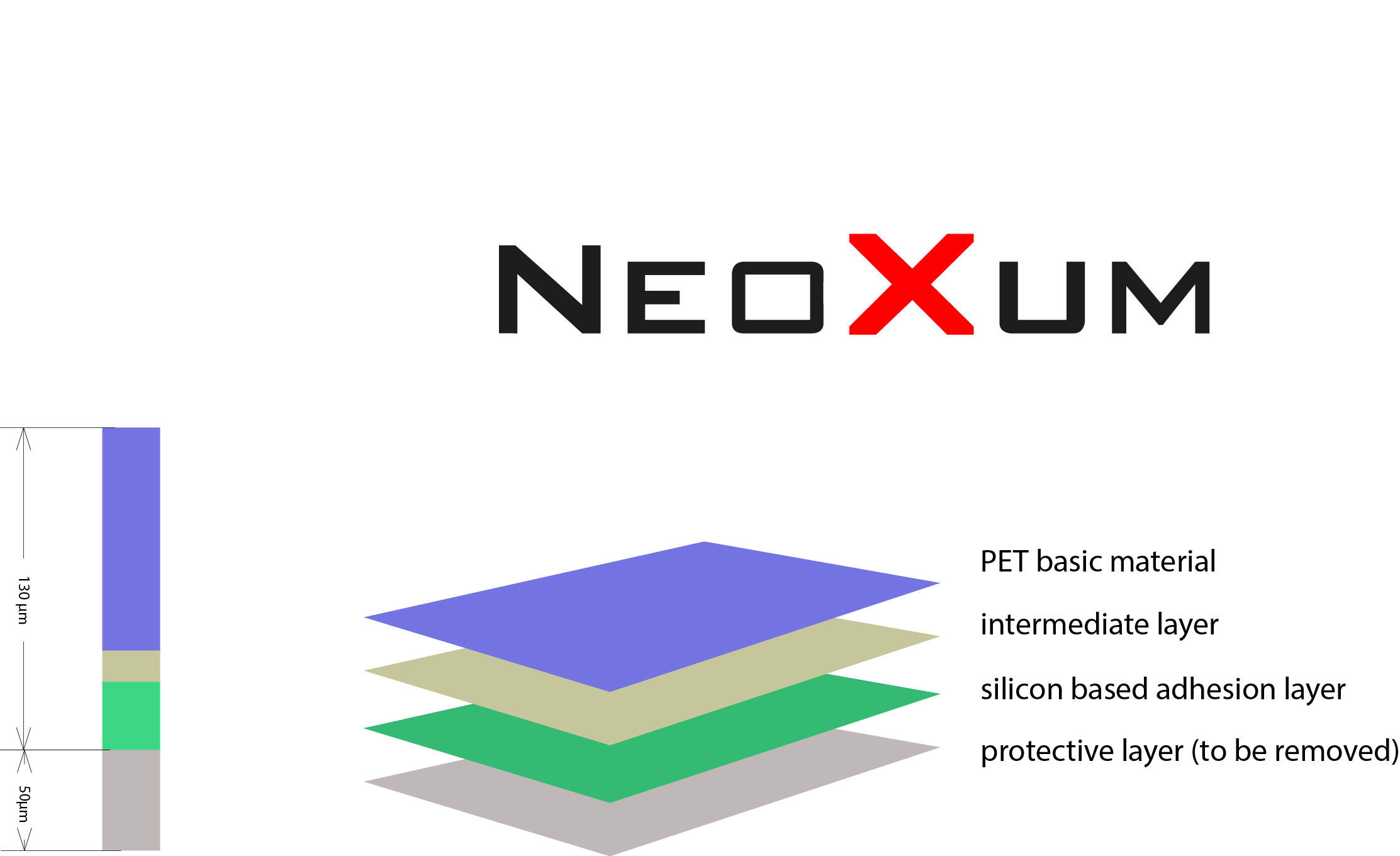 We are not talking about foils that are sold on various platforms for €2.95 for 12 pieces. In general, the question arises why you need 12 foils as a user. This can only mean that the quality of the cheap film is in the range of better cling film and has nothing to do with industrial and professional protection or an effective anti-reflection effect.

Neoxum anti-reflective and crystal clear films are made of special completely non-toxic or non-irritating polymer that meets industry standards. Manufactured in Germany according to DIN ISO 9001 quality standard.

We summarized the key features, as well as a technical data sheet, in the download area.

Do I still have to cut the Neoxum screen protectors myself?

The screen protecting foils do not have to be cut to size yourself!  Both the anti-reflection AGS and the crystal-clear AS protective film are cut to fit precisely using state-of-the-art laser cutting equipment. Cutouts for camera lenses, microphones or speakers are taken into account as well as special corner radii or display shapes and dimensions. We cut your display protection foils as well as the hybrid glass to an accuracy of 0.1 mm, taking into account optimal mounting and all necessary edges, radii and recesses. Of course, we also manufacture special dimensions up to 3000 mm x 1000 mm (for example as privacy film or shatter protection film).

A modern touch display device with its sensor or microphone, but also a special sensor can do much more than just display an image. All these cut-outs, as well as the exact outer contour of the device display is taken into account with Neoxum products. 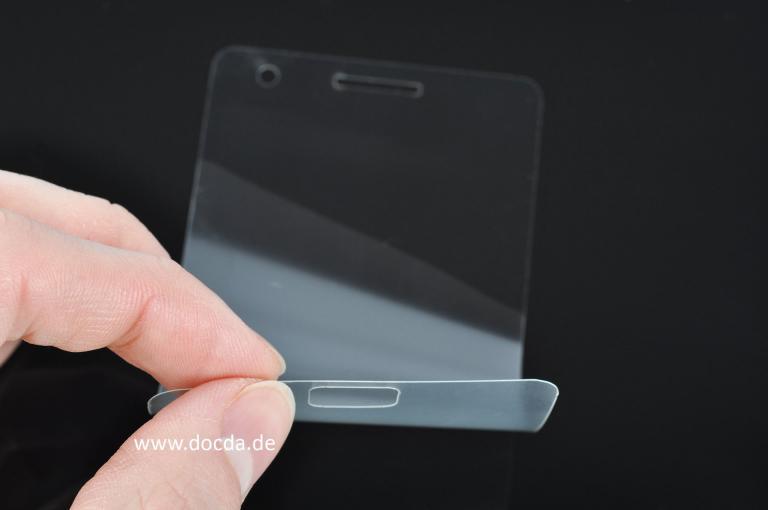 Is the application of the screen protector film complicated?

Neoxum protective anti-glare, as well as ultra-clear display films are delivered with detailed and illustrated installation instructions. If you follow these instructions, the application is very simple and can be done by non-professionals without any problems. It is recommended that a second person helps with the application of a large display film (from about 14 inches display diagonal) (if you don't have any practice). A low-dust room is recommended for the installation. 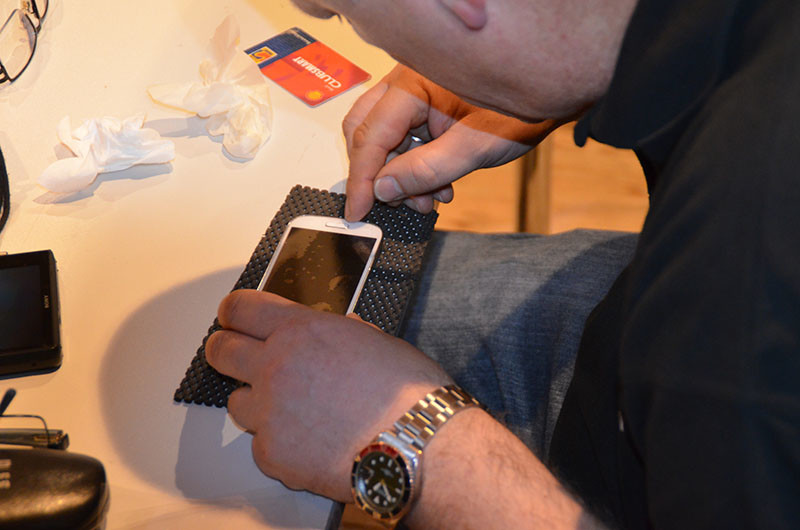