OnScreen® hybrid glass is a brand product of Neoxum GmbH

OnScreen® hybrid glass is an extremely durable flexible composite of glass and special polymer with the flexibility of a film combined with the hard surface of glass. The hard surface of 7H according to ISO 15184 guarantees efficient scratch protection of sensitive displays and surfaces. OnScreen® hybrid glass is the perfect combination of the properties of transparent glass and the flexibility of a plastic film. The result is a very flexible bendable and transparent surface protection that has a glass-hard surface and yet is elastic enough not to shatter like glass. Equipped with a thin silicone layer, hybrid glass films adhere perfectly to all smooth surfaces made of plastic, glass or metal without leaving any residue when removed later. Touch surfaces are effectively protected from scratches and mechanical damage. In our opinion, OnScreen® hybrid glass is the perfect scratch protection and superior to fragile bulletproof glass. 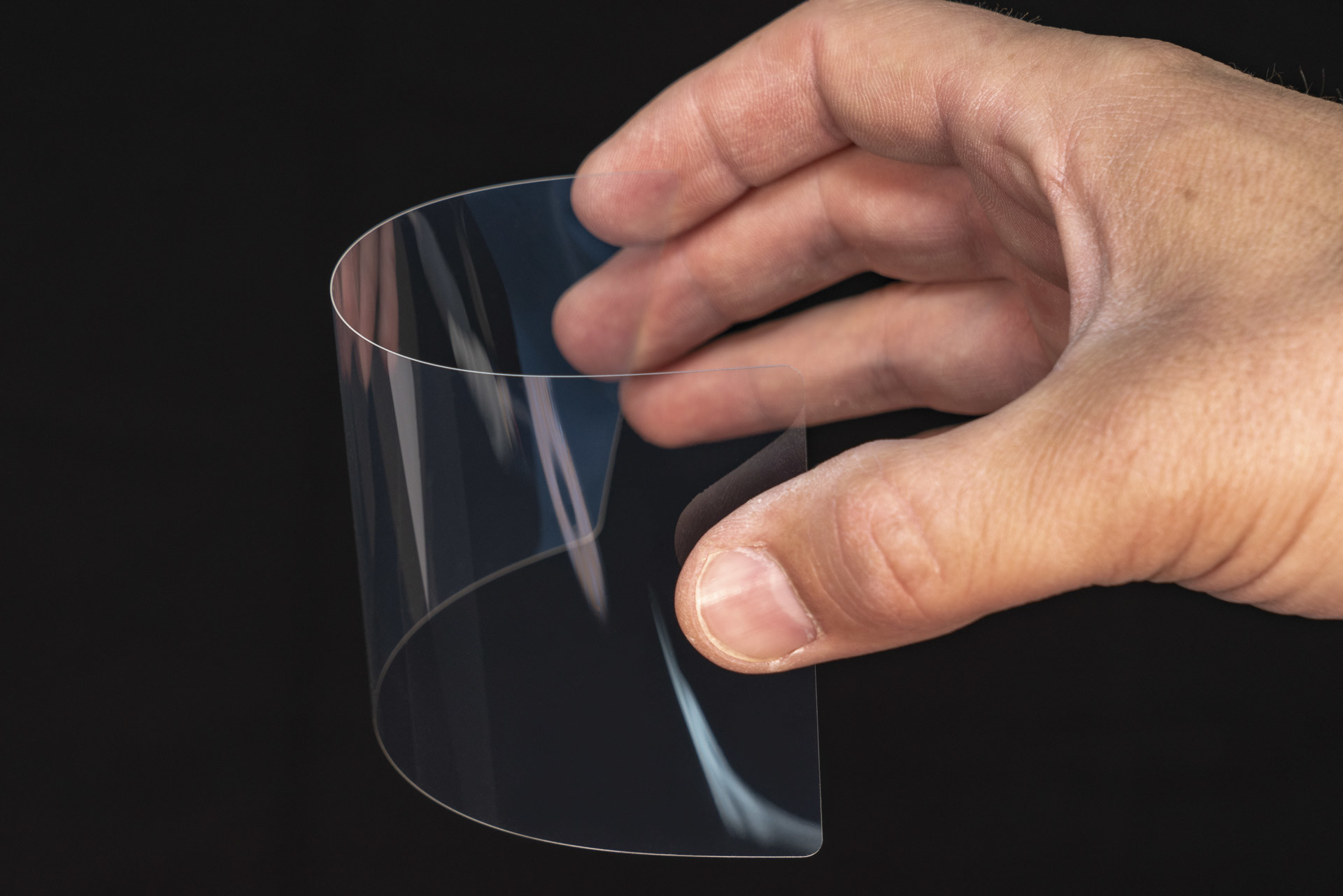 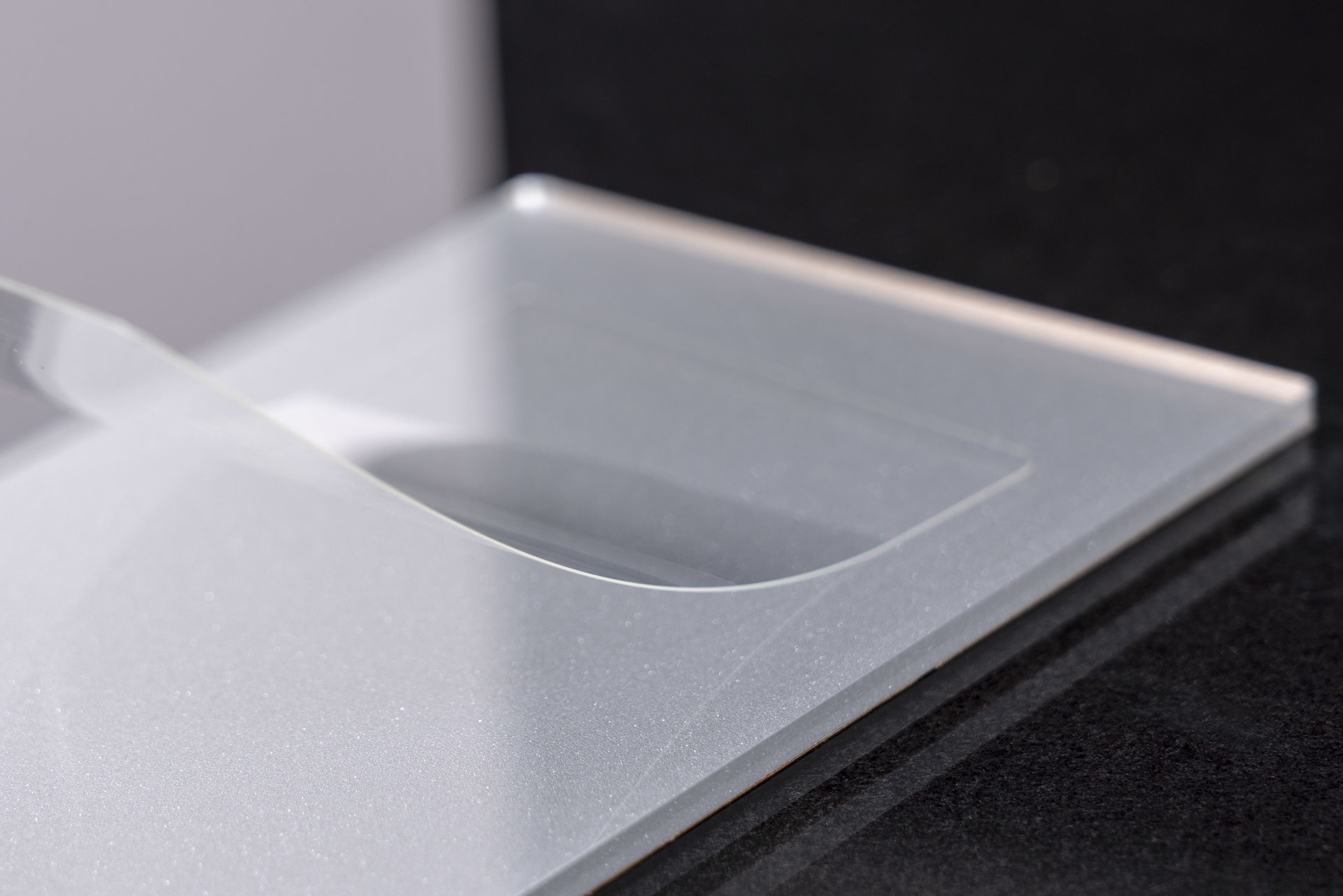 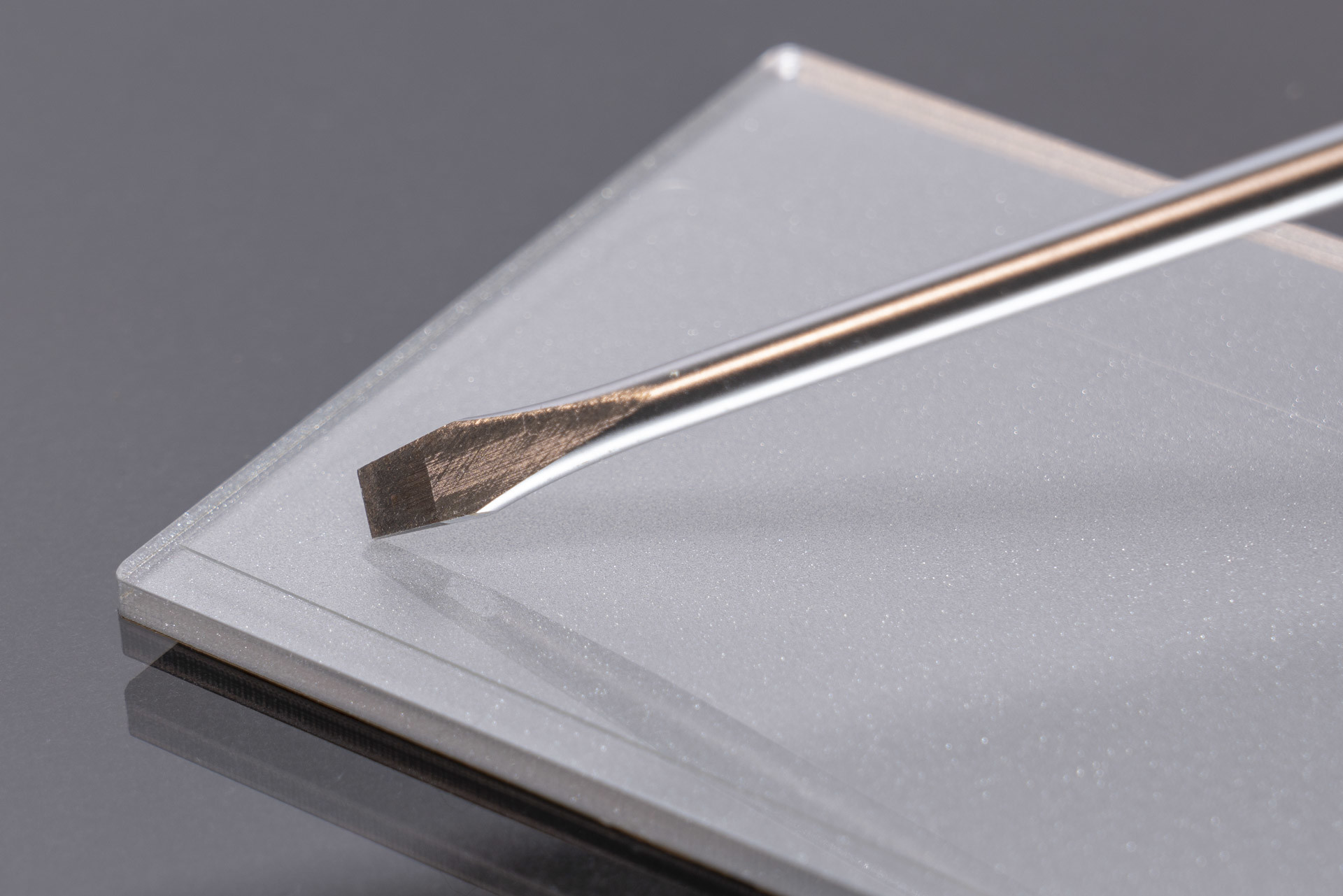 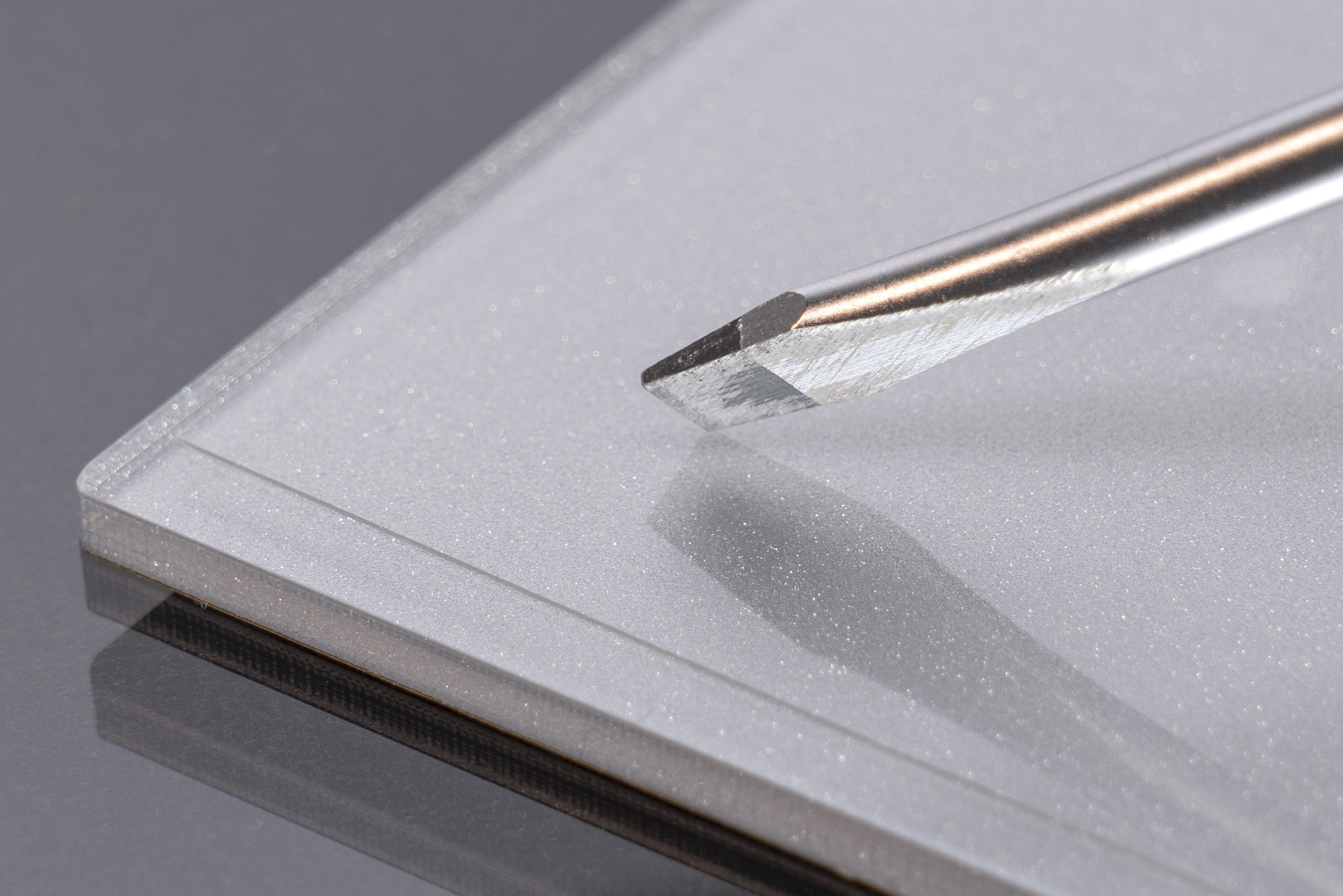 If an application on the display is no longer clearly visible in direct sunlight, we recommend using the equally robust anti-reflective hybrid glass with matt surface coating.

The color fastness of OnScreen® hybrid glass is extremely high. An essential property of glass is its light transmission in the spectrum that is optically visible to humans, about 400 to 800 nanometers. In addition, glass shows excellent properties in terms of color fastness. Due to the amorphous structure of glass, which is combined with a highly transparent special polymer, the result is extremely high color fidelity: Colors of the screen or display, or touch screens are completely preserved and are not distorted or the color spectrum shifted. Feedback from our customers in the field of photography or graphics confirms the outstanding optical properties. Customers from the industrial environment who use the very hard surface and flexibility of hybrid glass, for example in their production on touch screens, panels or terminals, are also convinced of the colour fidelity. 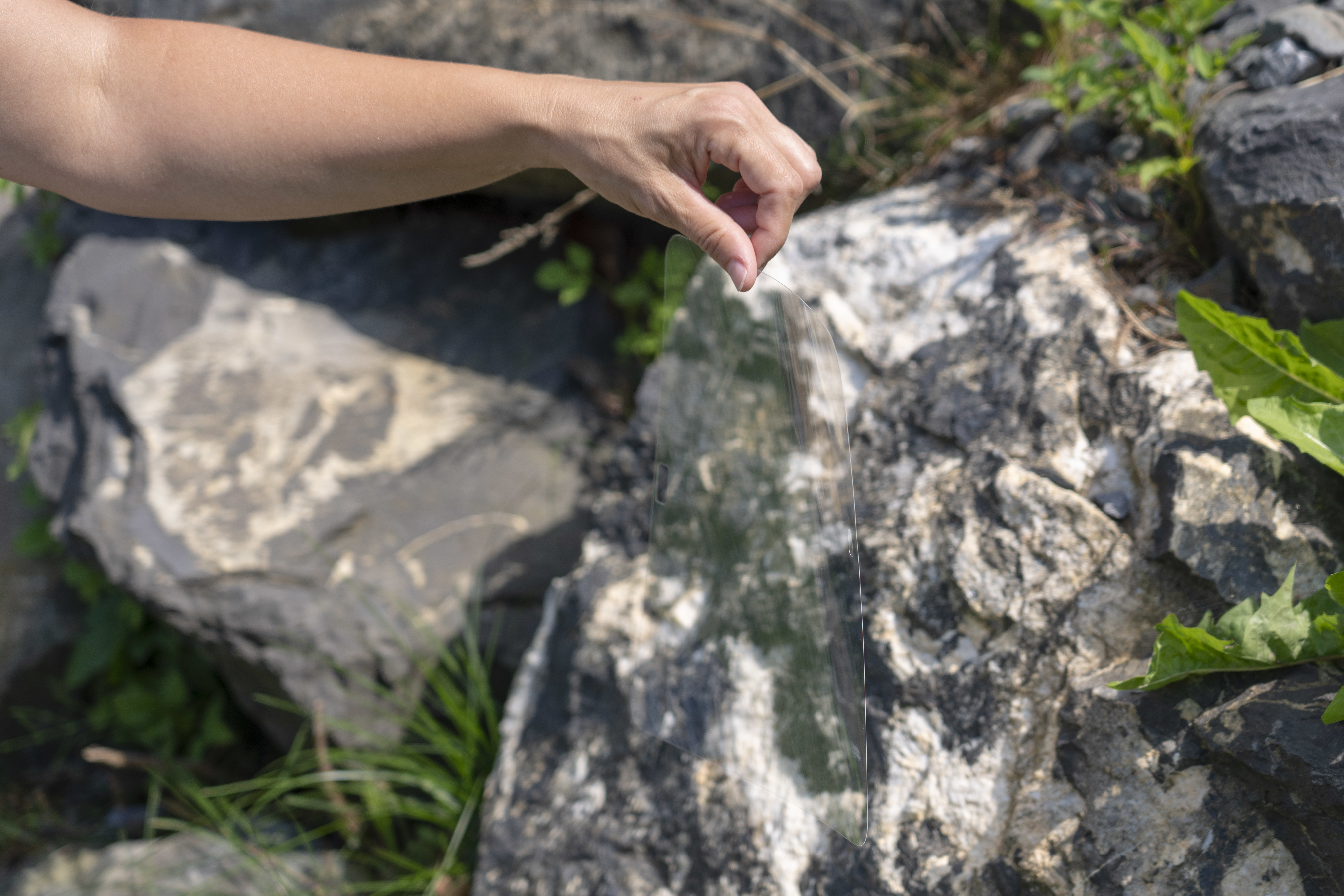 Both the Anti-glare film as well as the crystal clear display foil of Neoxum are extremely temperature resistant. OnScreen ® hybrid glass is also very temperature resistant. Tests have shown that the flexible and glass-hard display protection material is stable in a temperature range from -30 °C to +140 °C. OnScreen® industrial grade hybrid glass protects sensitive displays in cold areas, such as outdoors, as well as in hot conditions, such as industrial panels in steel production or in the printing industry. Neoxum OnScreen® hybrid glass remains absolutely dimensionally stable at high temperature or cold. The flexible and crystal-clear, non-splintering alternative to bulletproof glass retains its high transparency and does not become cloudy even after many loads.

Heat test with an angle grinder (flex) which grinds a metal block. The OnScreen hybrid glass withstands extreme flying sparks. Subsequently, extreme test with a hammer blow on the hybrid glass, which was applied to a plexiglass carrier

In our Blog post we had already reported on the availability of the detailed test report on chemical and temperature resistance. 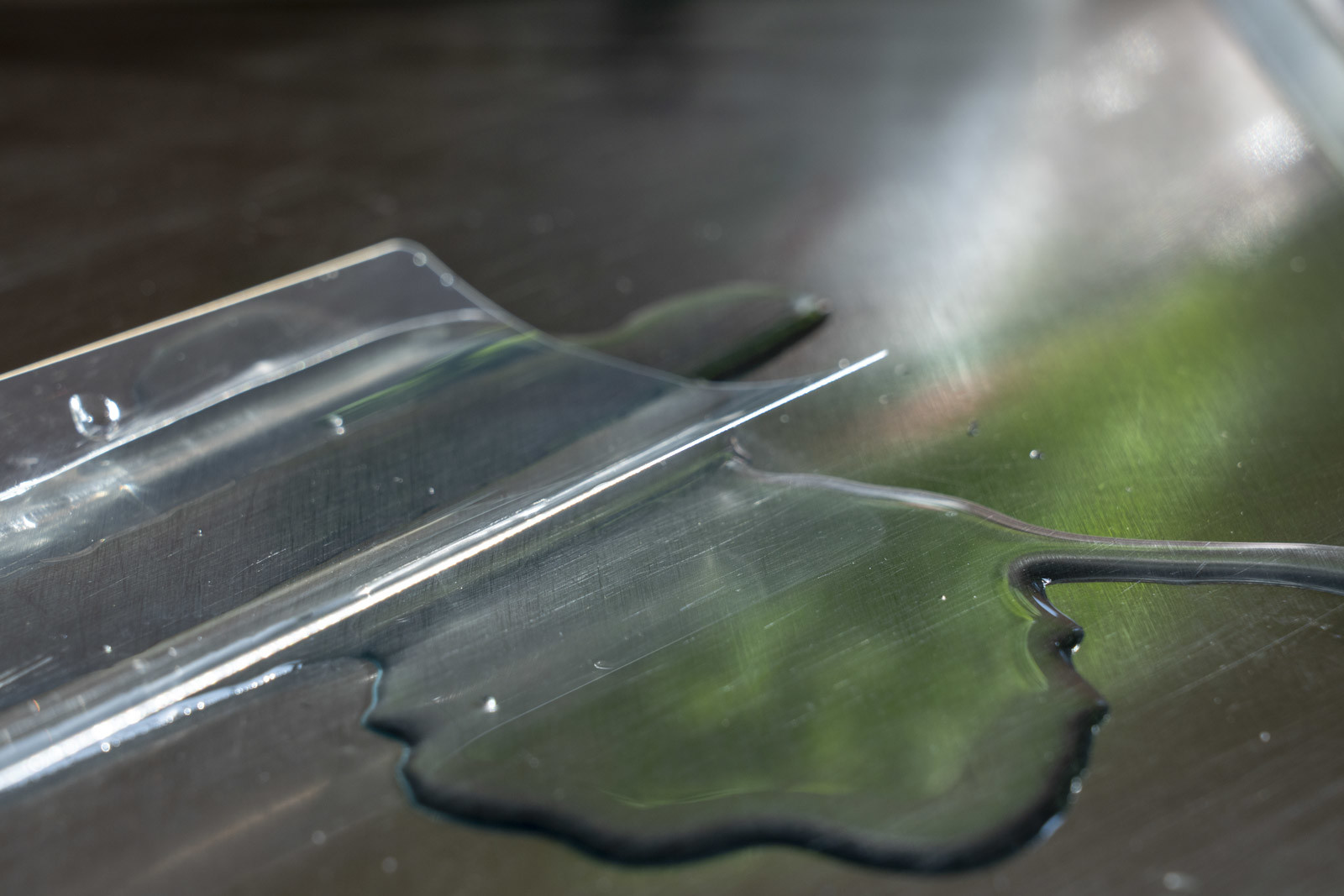 Adhesion of the OnScreen ® hybrid glass

Analogous to our Anti-reflex display protection films or crystal-clear display protection films OnScreen ® hybrid glasses adhere exclusively via physical adhesion forces. The siliconized underside of the hybrid glass adheres to smooth surfaces such as glass, plastics, polished metals and even painted surfaces by means of a kind of suction foot in the nanometer range. Doing without adhesive has the advantage that the adhesion is reversible and at the same time so strong that an applied hybrid glass never slips under normal conditions. Neither cold nor high temperatures reduce the adhesion on smooth surfaces. Aging, as with acrylic adhesives, is not observed. OnScreen ® hybrid glasses are perfectly suited for industrial applications. But the flexible glass foils are also suitable as scratch protection for mobile phones, cameras and touch screens. Neoxum produces OnScreen ® hybrid glasses up to a size of 1000 x 800 mm (approx. 55 inches diagonal) in almost any shape (very tight radii must be tested in advance) and quantity according to customer specifications.

Neoxum display protection films and our OnScreen ® hybrid glass adhere purely by physical adhesion, i.e. the films adhere to the display via a kind of "suction foot in the nanometer range", without the use of any adhesives or glues. When removing Neoxum Display Protection films or hybrid glass from the display, no residues of any kind remain on the display.

More precisely, several physical-chemical forces play a role. Adhesion is a fundamental phenomenon in the molecular domain, which is caused by polar interactions at interfaces, in our case the interface display surface <–> Silicone adhesion layer of the Neoxum display film, or OnScreen ® hybrid glass, so-called Van-der-Waals bonds between molecules of the display surface and molecules of the adhesion layer (the very thin silicone adhesion layer). The decisive factor for adhesion is the spatial proximity of the two surfaces. The silicone adhesive layer of Neoxum Display Protection, or surface protection, is such that our display films, as well as our hybrid glass, adhere very well to many smooth materials such as plastics, metals and glass. The adhesive film and hybrid glass can be removed from all types of material without leaving any residue.

The OnScreen ® hybrid glass can be easily removed from all surfaces without leaving any residue.

Data protection and SSL encryption of the Neoxum website

The data transfer on the Neoxum.de website uses SSL

encrypted instead. A strong 256 bit encryption secures the data transmission. With our externally issued SSL certificate we are transparent and compliant. Besides the SSL secured website we take data protection very seriously. Data protection under the basic data protection regulation is a matter of course for us.